The Book of Mormon contains 337 proper names—188 of these are unique to the Book of Mormon and 149 are found in the Bible.1 Latter-day Saints have suggested that these ~200 new names are evidence that the Book of Mormon was generated via divine intervention, especially because they appear Hebrew in origin or have been found in other ancient non-biblical sources.2

Sandra Tanner has argued that the extra-Biblical names could be based on rearrangements of Bible names or by simply adding “hah” to existing names. Others have generated a list of possible sources for 200 of 219 Book of Mormon names3, most of which derive in some way from the Bible.

If we assume Joseph authored the book, and given what we know about creativity theory (a creator necessarily draws upon elements to which they have been exposed), then we would expect the raw elements to exist in Joseph’s environment. By his own admission, Joseph was very familiar with the Bible, so this seems like a reasonable creative source for new names. In addition, some names in the Book of Mormon seem similar to names found in Joseph Smith’s vicinity. A modern author may have drawn inspiration from one or more of the names in their own locale.

Below are place names that seem similar to Book of Mormon names in the northeastern United States and nearby Canada prepared by Mary Ann at Wheat and Tares (verbiage is hers; I have grouped the names and made some slight modifications4):

Found in the Bible

The Bible could have been the source of inspiration for names that are found within it, so invoking a place name is unnecessary for its accounting. Still, a nearby placename might increase the likelihood of its usage in the Book of Mormon. These, or a near phonetic variant, are found in the Bible

Similar to a Bible name

Not in the Bible

Mary Ann also located these places on a map: 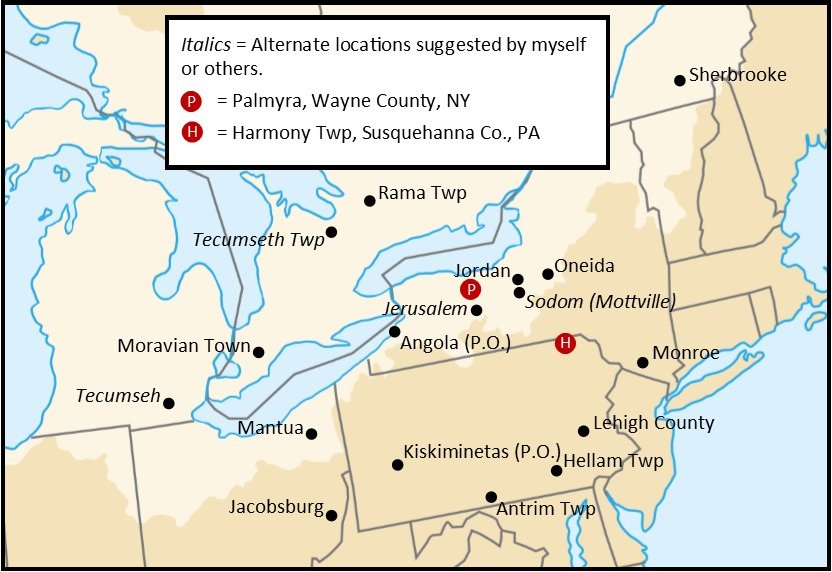 Could Joseph have known these?

We have no direct evidence that Joseph Smith knew of these names; however, people know the names of places around where they live, to varying extents. Palmyra was somewhat of a transportation hub on the Erie canal, and the 1823 New World Gazatteer notes “The village is a place of considerable business” with a population of 3,724, so a person may have been exposed by word of mouth to news of surrounding areas. It also seems reasonable to suggest that the likelihood that Joseph had heard a given name increases with the notoriety and size of the place and diminishes with distance.

The researcher responsible for the above list suggested that “[critics] need to prove Joseph Smith had access to publications with these towns.” While this would be ideal, information was also transmitted by word of mouth, so it seems possible that Smith may have heard these place names discussed in one context or another.

What does it mean?

Probably not much. We could look for place names similar to Book of Mormon place names in any location on earth and likely find a number of near-matches across the unique 188 names.

Still, it does offer a counterpoint to the query, “where could Joseph have gotten all those names?” He could have made them up, conciously or subconciously being inspired by:

There is no direct evidence that Joseph Smith consulted any of these, but nor would a modern author of the Book of Mormon have been working in a vacuum void of potential inspirational name material.